They say that laughter is the best medicine.Three area comedians are out to prove that laughter is also a good way to raise funds for cancer research. Their Funny Fundraiser is set for Saturday at the Reamstown Fire Hall, when David Kaye, Chuck Krieger and Matt Hess join forces to “laugh away” for the benefit of the American Cancer Society.Organized by the In Memory of Angels in Heaven Relay for Life, the Funny Fundraiser is the first for the organization.
“My stepsister and my husband’s father had cancer,” says Kim Walters, a volunteer with In Memory of Angels in Heaven.
“I think everyone has been touched by it.”. …. Click Here for the Full Article

Spare a thought for Polish Americans. For reasons that remain murky, they were selected as the verbal stunt-double whenever a joke called for a stupid protagonist. If they were paid royalties for every Polish joke that was ever told, they’d be hedge fund clients. It was only a matter of time before Poles fought back. Today through Sunday, three Polish-American comedians take the stage at the Pittsburgh Improv for a Warsaw-themed night of comedy and polka music.
“Three Poles Walk Into a Bar” features Polish comedians Bob Golub, Bill Rutkoski and local comedian David Kaye, who reverted to his given name of Kwiatkoski for the show. Kaye grew up in the North Hills, but his father came from the SouthSide Slopes.
“My dad worked in the mill,” he says. “His name was so hard to pronounce, his nickname was Murphy.”Rutkoski has appeared on “Arrested Development” and “Two and a Half Men.” Kaye has been seen on Comedy Central and runs Slapsticks Comedy Loft in Bethel Park. Golub, the show’s mastermind, came by his nickname, the Polish Madman, dishonestly. A former drug dealer, convict and boxer, he grew up in the Rust Belt hamlet of Farrell outside of Sharon, one of eight children. …. Click Here for the Full Article

Comedian Has A New Room To Roost

How many comedians does it take to screw in a light bulb?
Pittsburgh comic David Kaye is the custodian, manager, box office attendant, waiter, publicist, opening act and occasional headliner at an intimate new comedy club. SlapSticks Comedy Loft fills the 80-seat upstairs room at The Royal Place Restaurant in Castle Shannon.
With a full bar and limited food menu, it will spotlight mostly local comedians on Fridays and Saturdays. Cover charges are $10 in advance and $12 at the door, with no drink minimums and free parking. A slow rollout has been under way since November. SlapSticks’ final pre-opening event will be a comedy contest Friday to select performers for Buzz Nutley’s Comedy Relief concert, which will be held at Seven Springs at an undetermined date in the spring. Former Pittsburgher Mike Irwin headlines SlapSticks’ official grand opening Saturday….. Click Here for the Full Article

As a youngster in Gibsonia, David Kaye sought attention by joking around. “I was the guy who put the lamp shade on his head at the party to get a laugh,” the co-owner of the South Hills’ newest comedy club said.When word spread 20 years ago that he planned to take a stab at stand-up comedy, a couple of dozen friends and relatives came to see him at the “open mike” promotion at the former Roman Gardens in Brentwood. Despite the stacked house, he didn’t get the laughs he expected, which merely “whet my appetite to improve,” he said. It also kicked off a career that includes bill-sharing performances with comics such as David Brenner, Weird Al Yankovic and Drew Carey, and opening for Ray Charles On Saturday, Slapsticks! Comedy Loft, the adult comedy club he operates with friend and comic Chris Ciardi, 51, of Munhall, will celebrate its grand opening.
It is upstairs at the Royal Place Restaurant, 2660 Library Road in Pittsburgh’s Overbrook neighborhood.Comedy acts have been staged Thursday, Friday and Saturday evenings since late November….. Click Here for the Full Article

Comic David Kaye opened Slapsticks Comedy Loft last year in Bethel Park. He grew up on Polish Hill and was a mechanical engineer before venturing into theater and stand-up.

The star who would play me in the movie version of my life and why:
Toss up between The Rock and Rosie O’Donnell because they are both so macho.

If the TV is on at 2 a.m., I’m watching:
IFC — the Independent Film Channel — I can’t get enough of subtitles and those topsy-turvy Euro plotlines.

After a long day, I like to relax with a (pick one):

D. Seeing that I don’t imbibe liquor, I’ll have to go with herbal tea. But if given the choice of teas, I’d pick Red Rose because you get a little ceramic circus animal in every box.…. Click Here for the Full Article

Talk about the comedy show from hell. In 1991, Pittsburgh comedian David Kaye and another local stand-up were oddly booked to open for a forgettable metal cover band at a theater in Greensburg, a town unschooled in comedy club etiquette.The mistress of ceremonies had barely begun her routine when the heckling started. It wasn’t the typical comedy room give-and-take — a handful of metal-heads shouted down her show with a barrage so vulgar and personally insulting that she left the stage in tears. Protective of his friend, mad at the house for not cracking the whip on the crowd and furious at the jerks in the audience, the middle act raced onto the stage.
Ladies and gentleman: David Kaye.
Dominating the theater in a slick purple pimp suit, blond hair spiked in a Don King ‘do, Kaye abandoned his standard routine and charged like an episode of “When Comedians Attack.” Five minutes into a pointed nonstop rant about inbred Westmoreland County rednecks and what individual loudmouths in the crowd do with their mothers, management abruptly cut the lights and dropped the curtain on him….. Click Here for the Full Article

Crafton Comedian Has Made ‘Em Laugh For 20 Years

Crafton resident David Kaye has been making people laugh for nearly two decades.
His travels as a stand-up comedian have taken him to all of the states east of the Mississippi, Arizona and New Mexico.”I’ve traveled as far away as California, to Florida, Canada. I’ve never made it to Alaska. I’d like to go to Hawaii,” Kaye says.
He has performed at several Improvs in California including locations in Melrose, Hollywood and Irvine. “As far as style goes, people have called me an intelligent Jim Brewer,” Kaye says. “I’m very cartoonish on stage. I do a lot of facial expressions, a lot of physical movement. I’m such a visual person. Generally I try to be visual with my stand-up. Some comics have such a command of the English language.
They paint such a vivid picture with just words. Sometimes I envy that. In terms of my individual style, the physicality of it, the energy I put behind it. I’m trained in theater.” 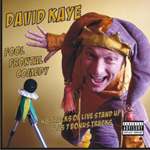